Implications – Review of “From Yonder Wooded Hill” by Riley Goodman 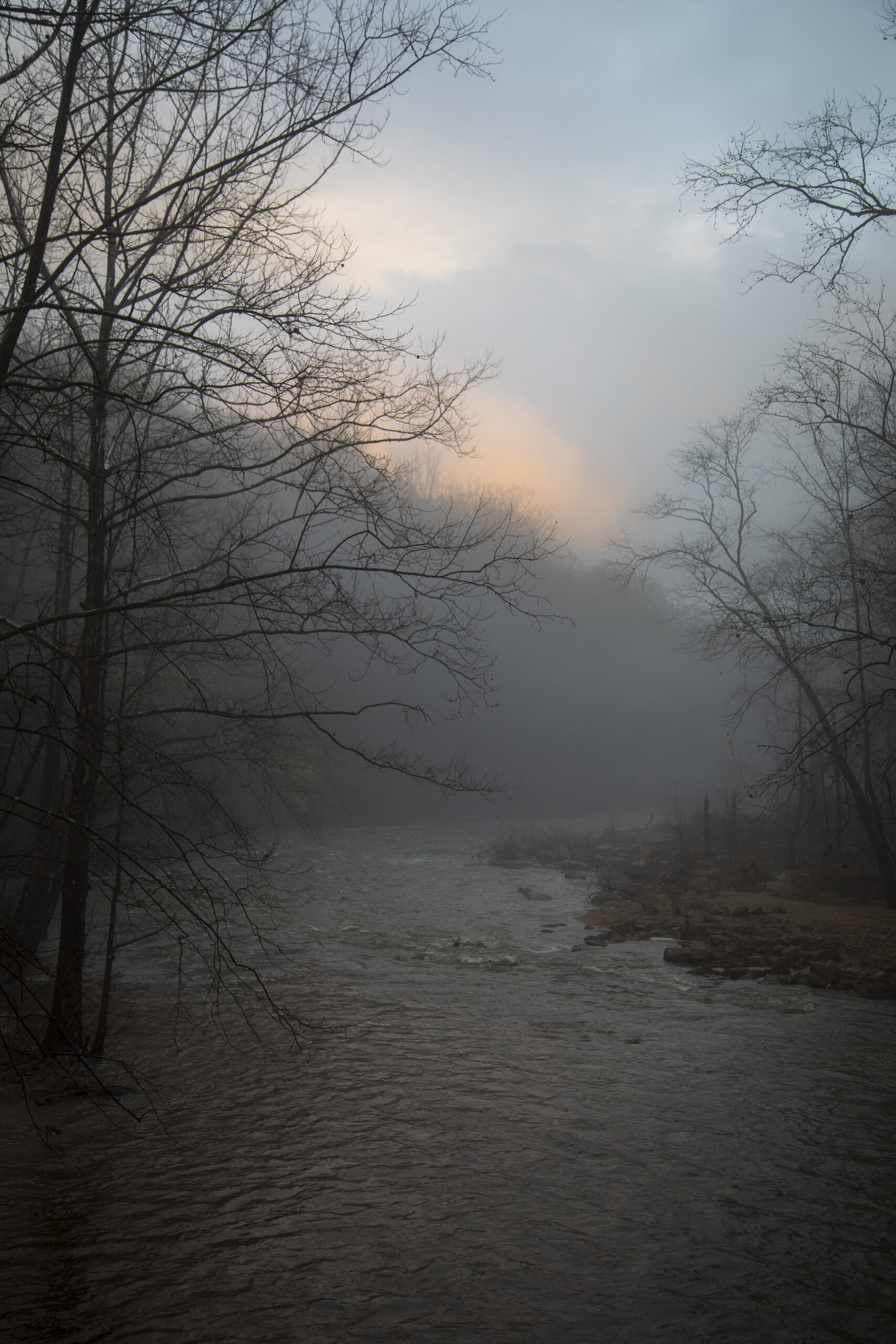 By definition, they are acts of storytelling. They are acts of memory, too, though the facts are nebulous and often dimly recalled. They purport to be truth, yet we accept their exaggerations. Legends begin in situation and end in mood. That’s what keeps them going. We may not remember all the details, if we ever knew them. But let me tell you a story about what it was like.

From Yonder Wooded Hill: A Legend as told by Riley Goodman is a peculiar and wonderful book. Beginning with its velour cover and slightly corny title, it declares itself to be something different from the standard photobook. This book is neither expose nor collection of fine art. It’s a story. It’s a story about a place. To be more exact, it’s a story about the mood of a place where deep currents are only implied, but implied everywhere.

The book begins with a short poem called “The Whip-Poor-Will,” which ends with these two stanzas:

What unforgotten wrong
haunts the ill-omened song?
What scourge of fate has left its loathed mark
Upon the cringing dark?

Classic folk-tale mood and tone there, and a sense of mystery to get us started.

The first image in the book is a weathered home elevated on supports. The front door is barred. Some wooden siding is missing. It is exactly the kind of weathered building which asks us to consider its history. Who used to live there? How did it come to be in its current condition? What ghosts remain?

The next image is the ruin of a stone building, vines draping over the broken wall, a window centered in the image. While the image is interesting as a portrait of a structure, its real merit comes from the questions, the narrative wondering, it provokes.

The third image is an old image, a head shot of a young man in front of a garden backdrop. He does not have a name. The caption reads: “The Doffer.” Who is he, really? How did he come to be described that way? What is his role in the town?

I’m sure you see my point. This is a book of photographs that asks to be read with an ethnographer’s or anthropologist’s eye.

There is an image of a heart cut into the bark of a tree, but the initials are unreadable. There is a picture of a traffic light pole at the intersection of Main Street and Ellicott Mills Drive, but rocks have surrounded the pole up to the level of the Walk/Don’t Walk sign. There are two facing images of a tree stump, cleanly felled but with an extra chain saw mark on its side, taken some years apart. The more weathered stump, in other words the more recent photograph, appears on the left-hand page, while the cleaner image, the older one, appears on the right. We read the spread as new/old to old/new.

Every bit of this book is tantalizing in the quest to learn what’s going on. For example, there’s an image of two hunting dogs in a fenced yard, gazing at someone intensely (a recent image), facing an old image of “The Huntsman” standing in a forest, holding a rifle, two dead rabbits in his hand. There are portraits simply labeled “The Basket Weaver” and “The Lumberman.” And there are images of places only labeled “The Stone Tape” (what appears to be a headstone) and “Asphodel Meadows” (a dead racoon).

From Yonder Wooded Hills: A Legend as told by Riley Goodman plays with the connection between past and present. It asks us to draw connections, not of certainty but of curiosity, between old images and new, between black and white and color in both time settings. Going through this book, slowly, is a bit like watching David Lynch’s Twin Peaks. It’s wonderful and creepy and irresistible.

At the very end of the book, Goodman includes a page of text which begins with a quote from Charles Joyner, from a book called Shared Traditions: Southern History & Folk Culture. It reads, “Folk culture embodies in its traditional chain of transmission the visions and values of folks themselves… What remains, after forgetting everything that is not truly memorable, is something primal, something very close to basic poetic impulse of the human species. People neither remember nor forget without reason.”

Goodman follows this with a bit of personal history. “From my ancestral West Virginia and North Carolina to the Patapsco River Valley of Maryland where I was raised, my family conjured superstitions and stories to make sense of their world. Walking on opposite sides of a pole splits two people’s souls; it’s customary to pray over floodwaters, and proper etiquette in the presence of a ghost involves asking, “What in the name of God do you want?” Growing up, I accepted this folklore as commonplace but came to understand with age that these stories were unique to a working class, Appalachian culture.”

According to the book’s press materials, Goodman is a BFA graduate of the Virginia Commonwealth University School of the Arts Photography program. His work has been featured in Time, Vice, and Oxford American among other outlets. From Yonder Wooded Hill marks Goodman’s first monograph. The book has been featured at Photo Lucida, the Athens Photo Festival in Greece, on the Real Photo Show, and in Goodman’s solo exhibition debut at Candela Gallery in Richmond, Virginia, among other features.

From Yonder Wooded Hills: A Legend as told by Riley Goodman asks to be read—not image by image but front to back. It does not explain a thing. What it does, however, is imply. It is not a story. It’s a legend. It’s filled with evident unknowings. And note that the title is not “as told to….” It’s “as told by….”

Considered this way, the book is wonderful.