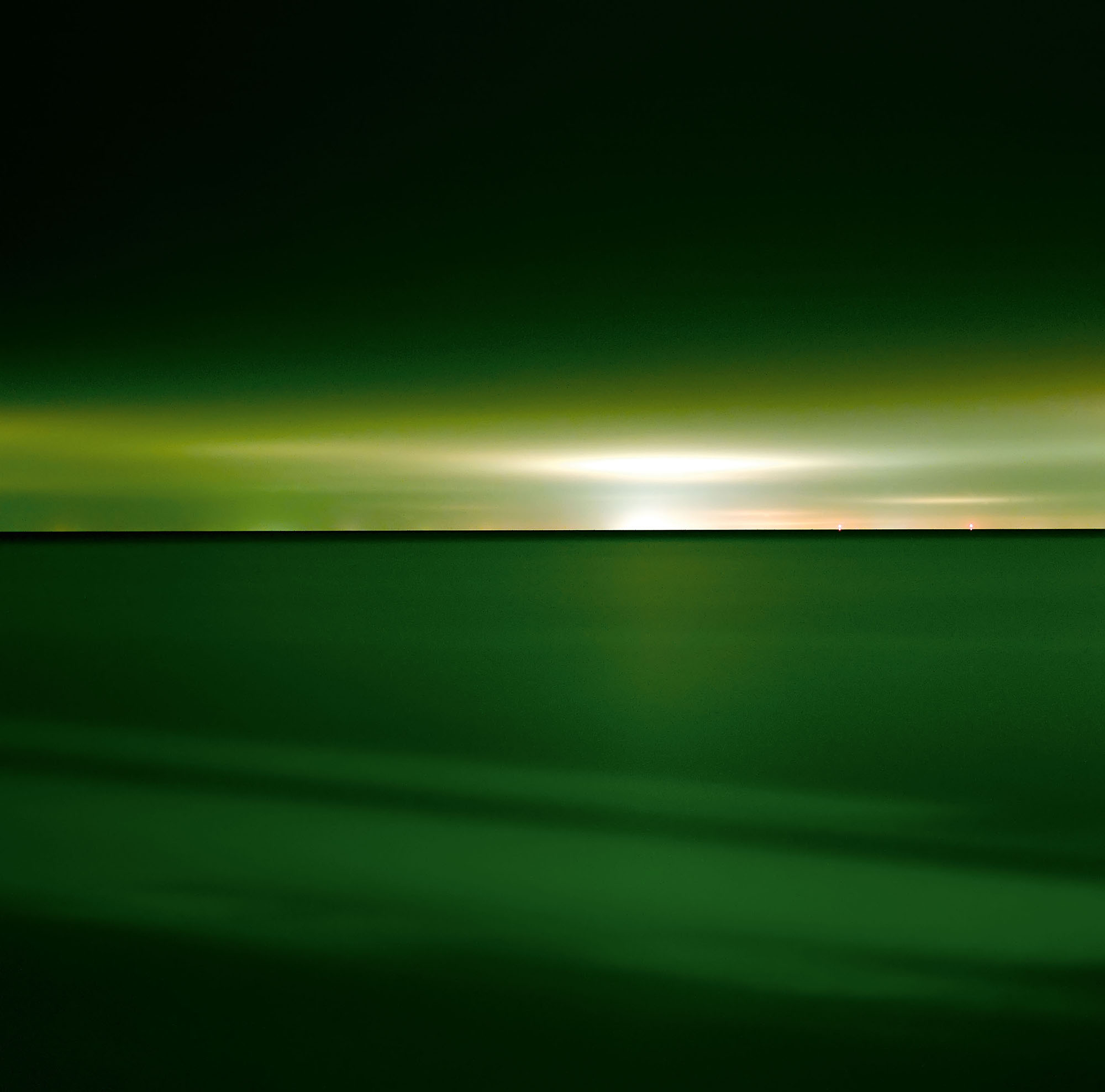 There is something wonderful about repetition and difference, the familiarity and depth of one, the freshness and serendipity of the other. Think Franz Liszt, “Variations on a Theme by Bach.” We know Bach’s tune. We know the notes and chords and the way the heart lifts to that music. But we do not know it Liszt’s way. A new joy is placed on top of the old one and a familiar world is remade anew.

We are always looking for the new in what we know. Sometimes it’s as common as a child’s game—one of these things is not like the other. We spend hours studying what appears to be identical images to find the one small difference. Sometimes it’s as fleeting as a memory or déjà vu, when we know we’ve been here, but not actually here, before. It’s a type of layering that brings perspective.

Lake Pictures, by Lucinda Devlin, is a wonderful new book that celebrates the variations on a theme of Lake Huron, one of the American Great Lakes. At one level, every picture is the same. A square image, the horizon set in the middle, water below, sky above. But after that, the collection ranges through weather and light to create a type of photo-poem that asks us to hold each image, each memory, in our head as the new variation is revealed.

Why do we stare at water? Is it some intuited notion of its foundation for life? Is it an appreciation or fear of the immense? Is it the rocking, the sense of groundlessness? Is it the weight and power and then the light-spray and joy? Or is it that water, like the fluid sky, has the ability to make and remake and then remake itself again in a seeming instant?  Yes, of course. Yes, to all of it.

At one level the scene is just water to every horizon. Same thing every moment of every day. But at another level it’s never the same. Any change in wind or light and the whole thing changes. Often, we call these changes moods.

The 50 images in Lake Pictures present just a portion of the many ways large water and sky reveal themselves and the result is a captivating, nuanced book.

According to the biography in the back of the book, Lucinda Devlin’s photographs have received several awards and are held in numerous public collections including the Guggenheim Museum and Whitney Museum, New York; Kunstsammlung Nordrhein-Westfalen, Düsseldorf; and DZ Bank Art Collection, Frankfurt. She has exhibited in museums throughout the U.S. and Europe and at the Venice Biennale; her first show in Germany presented “The Omega Suites” at Galerie m, Bochum, in 1998. In 2017 Devlin held a comprehensive solo exhibition at the Weatherspoon Art Museum, Greensboro, and the George Eastman Museum, Rochester.

In a brief bit of text after the images, nonfiction author Jerry Dennis says, “For several years she photographed the same slice of Lake Huron from the same spot on the Michigan shore, in all seasons, day and night, and in every weather. The result is a lucid, fearless and utterly unsentimental portrait….”

In another afterword, Tom Sherman, a recipient of Canada’s Governor General’s Award in Visual and Media Art and a professor of video art at Syracuse University, says, “Gazing out into the spatial expanse of an infinite body of water, whether a Great Lake or an ocean, is always about updating the sensorial and perceptual impact of such an immeasurably complex visual field. Repeated viewing is unavoidable given the horizon’s allure. The luxurious space where the water meets the sky transfixes our minds in a meditative state where self-awareness and the weight of one’s body dissipate. It is healthy to look into the distance, unhindered by landforms or architecture. Locked in this beautiful, confined but open space, embarrassingly rich in physical elegance and complexity, the lake and its sky determine a set of rules for contemplation.”

Although Devlin’s camera is looking at the same bit of lake in every image, her range of approaches is wide and impressive. We see the lake in every season and in both day and night. The green image is a 45-minute exposure. There is no apology for bad weather or fog.  Each picture has a simple caption. Lake Huron, and then a date and time of day. The lake is what it is.

Of course, the real power from an approach like this comes from the ability to hold several images in mind at the same time. Listening to Liszt, we are simultaneously remembering listening to Bach. Looking at one image in this book, we are simultaneously remembering the images on pages we have just turned.  One of these things is not like the other. Oh wait, but one of these things is like the other. It’s not just comparison. It’s layering and addition and a promise that the lake is larger than any one moment and any one brief way to imagine it.

Yes, this is a book for contemplation. Turn the pages slowly and look deeply.  Wonder and then do it again.